Westenergy Oy Ab was registered in the Finnish Trade Register on 1 January 2008. The company’s trade registration number is 2165379 – 9 and its registered office is in Mustasaari. The company is owned by Oy Botniarosk Ab, Lakeuden Etappi Oy, Millespakka Oy, Ab Stormossen Oy and Vestia Oy. The past financial period was the eleventh in the company’s history. Westenergy’s main line of business is operating a Waste-to-Energy plant. The company operates on the absorption principle and does not distribute dividends.

The company has built an incineration plant for non-recyclable municipal waste on a property that it owns in Koivulahti, Mustasaari, and sells waste treatment services to its shareholders on the absorption principle. The steam produced in the incineration plant is converted into electricity and district heat with the machinery of the company’s partner, Vaasan Sähkö Oy. The plant was finished and went into operation in August 2012.

The year 2019 was challenging for Westenergy. During the year under review, the company carried out major investments and alteration works. Despite the disruption, the plant processed nearly the same amount of waste as the previous year. The utilisation rate of the plan is good, even if it slightly falls short from that of 2018. High utilisation rate and successful investments and disruption management guaranteed a better financial result than was initially anticipated. The year-on-year net turnover shows a slight increase. This was largely driven by the increase in the district heat supply following a growth in waste supply and investments; the value of waste supply and district heath supply exceeded our expectations. The price of electricity was disappointing during the year under review, and although the year-on-year amount of supply again increased, their value still showed a slight decrease compared to 2018. While falling a fraction short of the previous years’ figures, the sales of metals nonetheless exceeded the estimates. Key figures are presented in the table below.

The amount of bottom slag processed in 2019 was slightly smaller than in the previous year. The work we have done together with our partners Lakeuden Etappi Oy and Suomen Erityisjäte Oy in developing the processing of slag further has taken steps forward. The treatment of bottom slag and the processing methods are undergoing constant development and the achieved efficiency has brought added cost savings.
The maintenance costs were slightly above the estimate, primarily for the comprehensive maintenance during the shutdown. This year, Westenergy operated a three-week annual maintenance and investment shutdown, during which extensive maintenance, repair and replacement works as well as new investments were carried out.
The chemical costs remained well within the estimate. In total, the variable costs were significantly lower than in the previous year and well within the estimate.

The total amount of investments made in 2019 came to EUR 6,274,563. The biggest investment in the year was the flue gas scrubber. The investment was made in response to stricter environmental standards to be applied in the treatment of flue gasses, and the investment also supports the improved energy efficiency of our plant. Thanks to the major investment, we will be able to comply with the provisions of the EU’s 2019 BREF document. We will also be able to recover heat energy from the flue gases, increasing Westenergy’s district heat output by a further 20%. This further increases the role of Westenergy in the district heat production for Vaasa region. Other main investments during the year under review included the upgrade of the primary air system capacity, the penstock valves of the slag extinguisher, replacement of baghouse filter transporter and auxiliary devices, replacement of pressure reduction and relief valves and glucol heat exchanger.

The company’s cash position continues to be good. The company obtained new capital through directed share issues. Alongside the existing owners Oy Botniarosk Ab, Lakeuden Etappi Oy, Millespakka Oy, Ab Stormossen Oy and Vestia Oy, a new owner Loimi-Hämeen jätehuolto Oy acquired a significant holding in the company. A portion of the new capital was posted under reserve for invested unrestricted equity. The company has hedged nearly 100 per cent of its non-current liabilities with financial instruments against adverse developments in the financial markets in order to reduce the fluctuations in its financial results as well as its financial risks.

Westenergy has sharpened its strategy during the year under review. The strategy is aligned with the climate and circular economy targets of the EU and Finland. Westenergy collaborated with its owner companies and other stakeholders in innovating and seeking new solutions for the future. Westenergy has acted as a pioneering force in defining the Green Deal package for the industry. Westenergy provides strong support to development projects and scientific research into circular economy and climate questions, working in close relationship with the University of Vaasa and VEBIC. Based on our strategy work, we have launched several development projects related to CO2 capture, more efficient utilisation of biofuels, conversion of non-recyclable waste fractions into energy and other materials, investigating potential additional capacity as well as the circular economy road map and building a waste-to-energy ecosystem. The company has also participated actively in the development of local circular economy together with the municipality of Mustasaari, Vaasanseudun Kehitys Oy and Ab Stormossen Oy.

In the past operating period, the Board of Directors consisted of Heikki Halla-aho (Chairman), Paavo Eloniemi (Vice-Chairman), Rangvald Blomfeldt, Paavo Hankonen, Jouko Huumarkangas, Ari Perälä, Harri Virtanen and Gunbritt Tallbäck (ordinary members). The Board met ten times in total during the past financial period. Olli Alhoniemi has acted as the Managing Director of Westenergy. The company’s regular auditor was the CPA firm Ernst & Young Oy with Kjell Berts, CPA, acting as the principal auditor.

The annual general meeting held on 7 June 2019 decided to issue 3,903,873 new shares at EUR 2/share. The issue was directed at Loimi-Hämeen Jätehuolto Oy, Oy Botniarosk Ab, Lakeuden Etappi Oy, Millespakka Oy and Vestia Oy. The directed share issue was based on weighty financial reasons as provided in Chapter 9 section 4(1) of the Limited Liability Companies Act, with the aim of strengthening the company’s financial standing and securing sufficient supply of raw materials. The subscription period was from 6 November to 18 November, and the shares were subscribed and paid up by 18 November 2019. EUR 1/share of the subscription price was posted under share capital, and the remaining funds (EUR 3,903,873) under reserve for invested unrestricted equity. The new shares and share capital were registered on 11 December 2019. The following table shows the number of shares and share of ownership by owner.

The objective of the ownership arrangements is to strengthen the ownership base of Westenergy Oy Ab, which would guarantee a sufficient waste supply until a distant future and enable Westenergy to provide cost-effective services to its shareholders. Until now, the current shareholders of Westenergy have acquired non-recyclable waste for energy production also outside their own operating areas through contractual arrangements.
With the ownership arrangements, the shareholders’ agreements and the supply agreements, which determine the relationship and operations between the shareholders and the company, were updated accordingly. The share of ownership still directly correlates with the supply quotas of each shareholder. The articles of association were also updated and the new shares were entered into the share register.

An extraordinary general meeting convened on 18 December 2019. The Company Board was discharged as of 31 December 2019 and a new board was appointed with its term commencing on 1 January 2020. Six new members were appointed to the Company Board. The new Members of the Board are Paavo Eloniemi (Chairman), Ragnvald Blomfeldt (Vice-Chairman), Paavo Hankonen, Jouko Huumarkangas, Teuvo Suominen and Harri Virtanen (ordinary members). The new Board was registered on 29 January 2020.

There have been no significant events after the end of the financial period.

The company’s registered share capital was EUR 15,903,873 in the end of the financial period. The company has 15,903,873 shares. The redemption clause set in the articles of association is applied on the shares, according to which other shareholders have the primary right to redeem shares and the company itself has the secondary right if the shares are to be transferred to a third party.

Because of the absorption principle, it is not appropriate to compare the key figures to profit-making companies when analysing Westenergy’s operations, financial position and results.

In compliance with Section 3 of the articles of association, the company does not distribute dividends. The Board of Directors proposes that the net loss for the period of EUR -4,173.61 be transferred to the profit and loss account as the company’s equity. 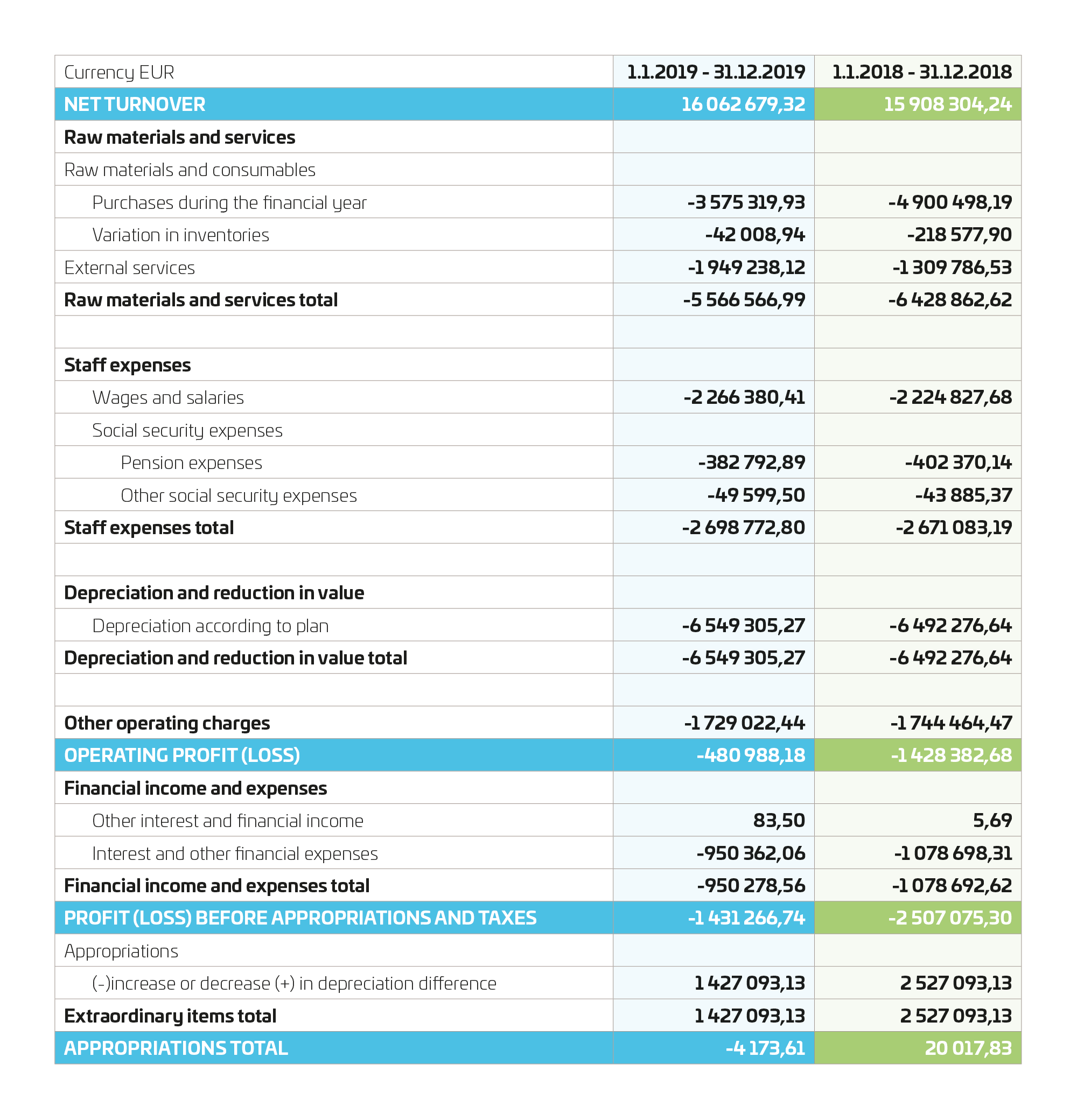 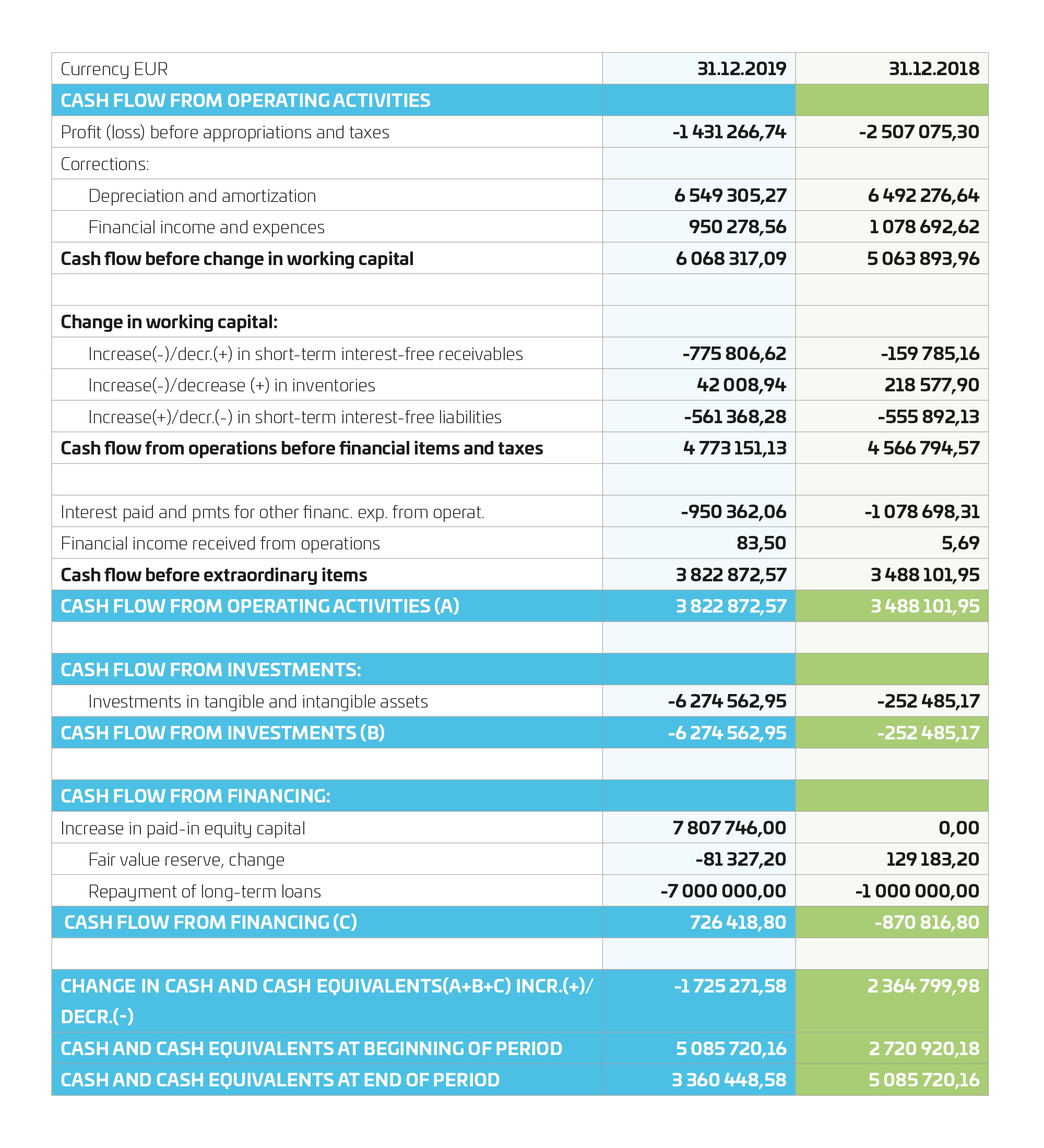 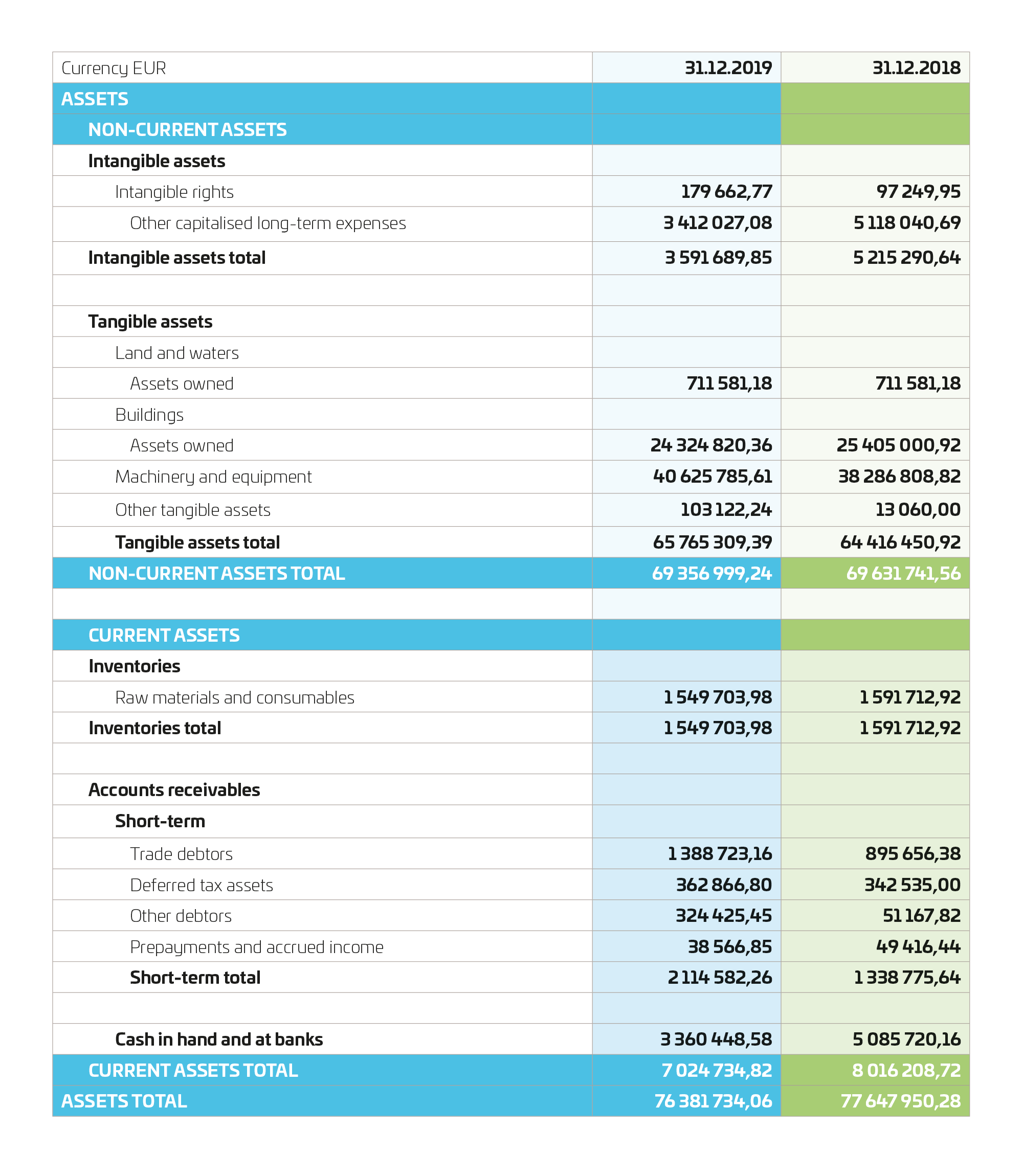 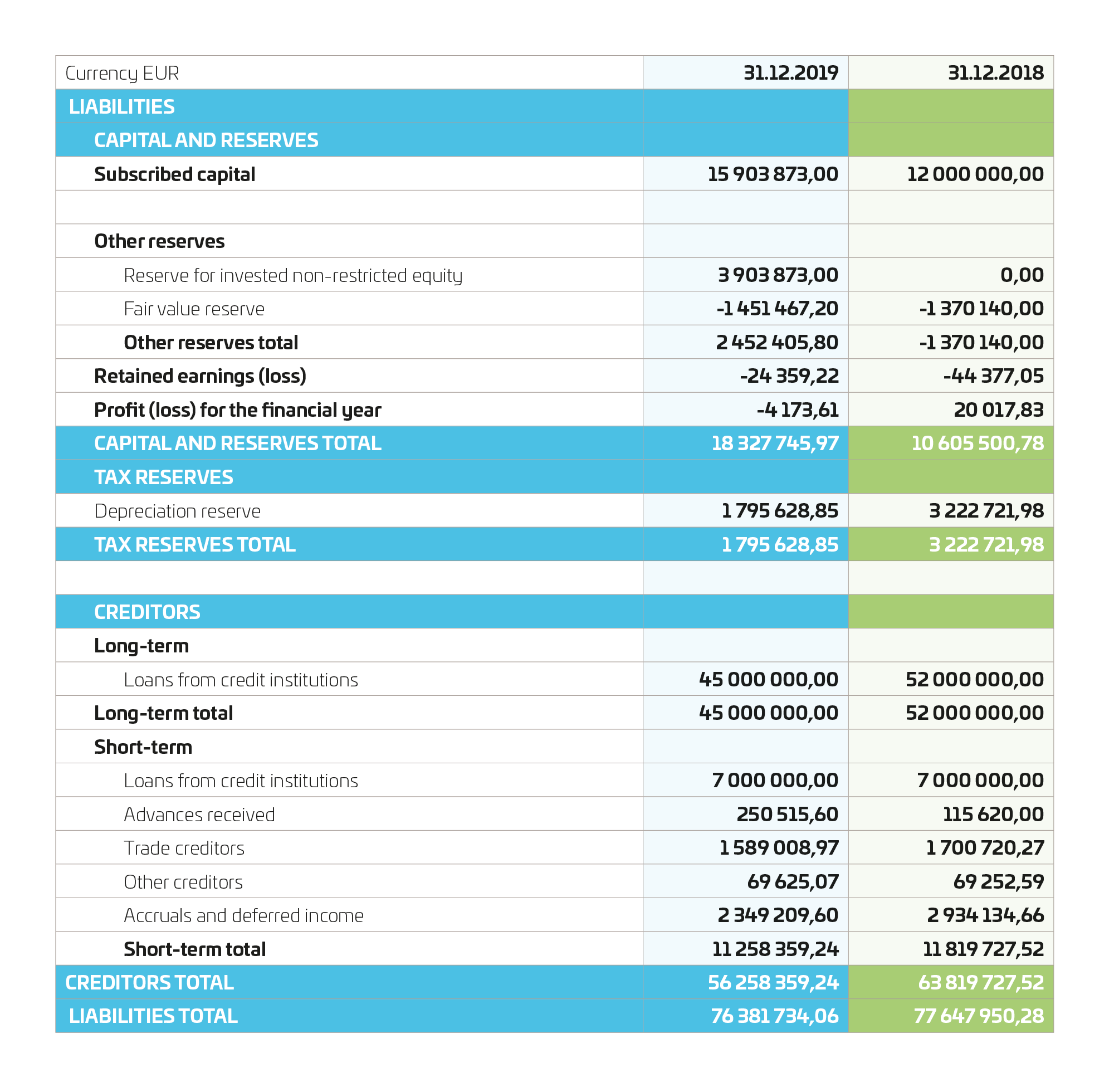 Policies followed in the financial statements

The company has entered into an interest derivative contract to manage the volatility of interest rates. Interest derivatives are hedged. The hedge instruments’ impact on profit is recognised together with the hedged item. Unrealised changes in value are recognised in the fair value reserve of equity. The fair value is calculated taking into account the deferred tax receivables.

Valuation and matching principles and methodology

Intangible assets recorded in the fixed assets of the company are valued at the historical cost of acquisition.

The fixed assets are valued at the variable and fixed costs of acquisition, the latter related to the fixed asset project.

The acquisition costs of reproducible assets are written off in accordance with the established plan. The depreciation plan is determined on the basis of economic life.

The estimated basis of depreciation according to plan and the changes thereof:

The undepreciated portion of activated interest expenses in the intangible assets is as follows:

Personnel and members of bodies

In the financial period, the company employed an average of 35 people.

Contingent liabilities and other commitments 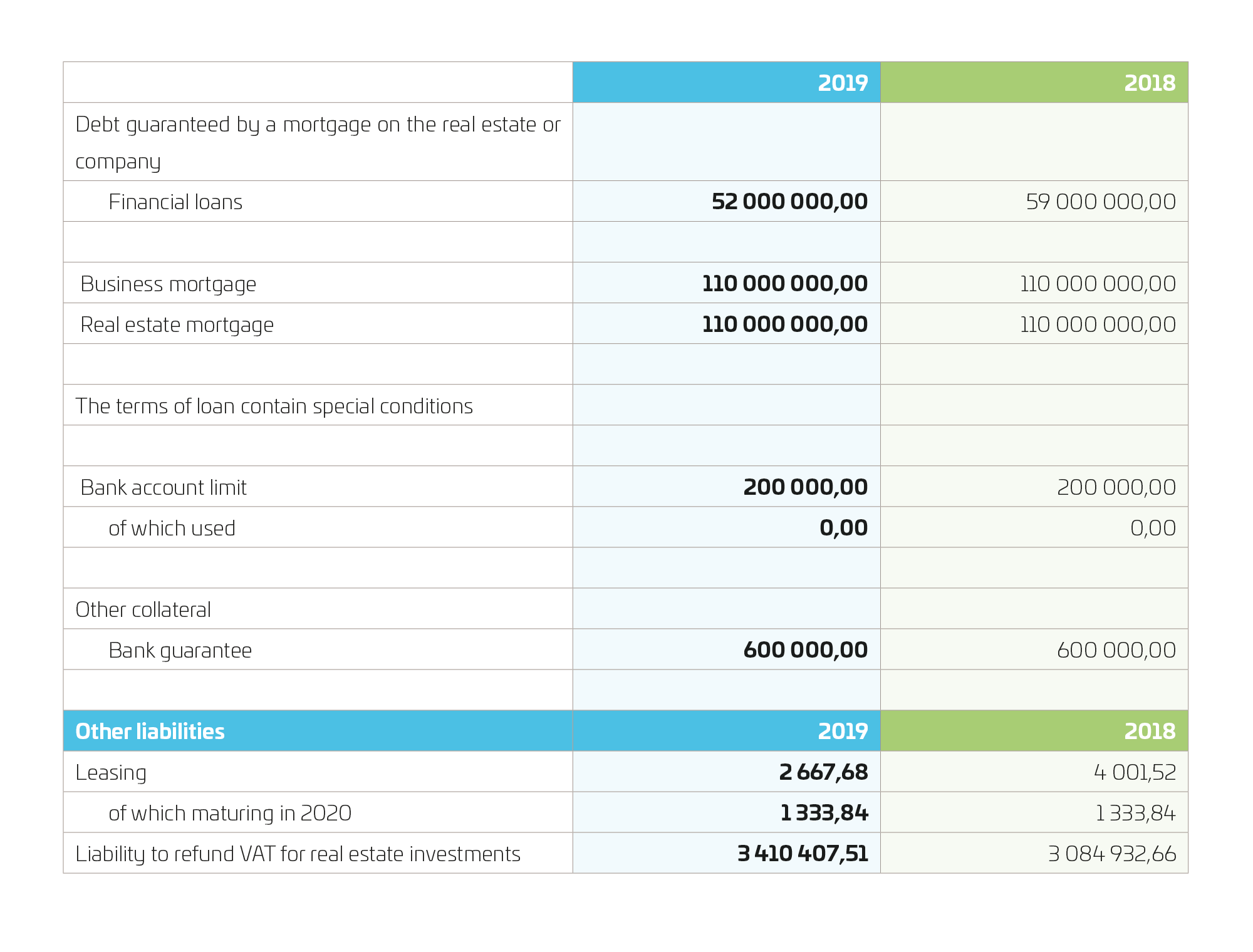 Details on the derivative contracts that hedge against interest rate risk

This interest rate swap contract hedges Westenergy’s loan of MEUR 26.4 with the final maturity date in four years. The review of loan terms is in 2020.

The fair value of the contract at the date of closure of the accounts:

Liabilities due in more than five years

Signing of the financial statements 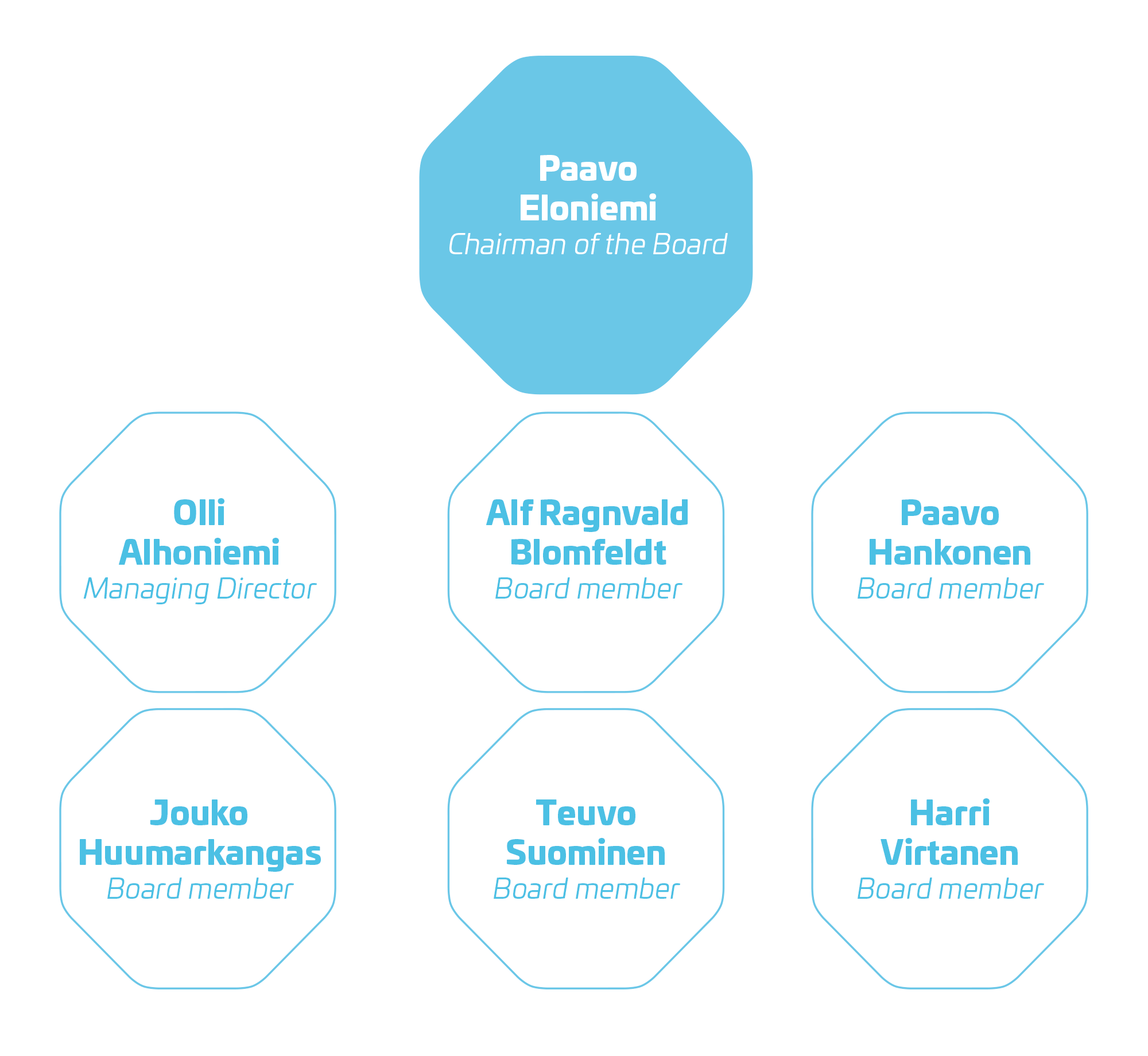